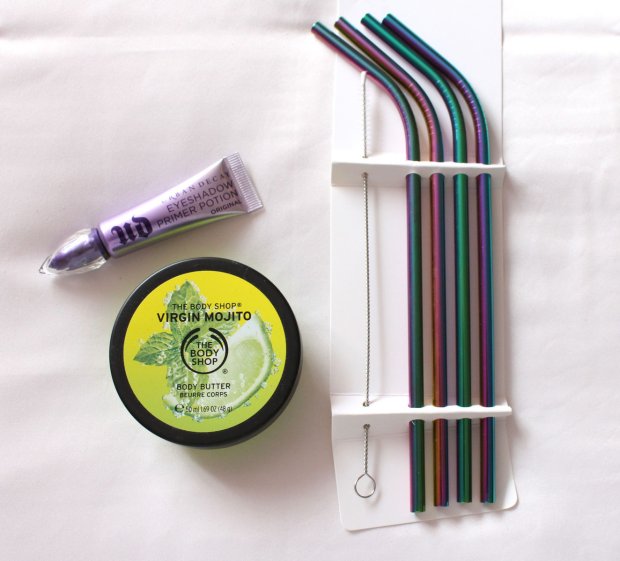 October has felt like a busy month. We are heading towards the end of the year and this month has had many different things going on. I made some online orders (clothes and makeup), myself and my mum have been ill and I haven’t read as much as I would have liked due to busy pace. The past few weeks I’ve felt tired and haven’t eaten all that well due to being sick.

1. Urban Decay Primer Potion – I purchased the Primer Potion from MECCA Beauty last month and I have been using it non stop! In this post it was love at first use and one month later I feel exactly the same. This is one of those cult beauty products that is worth the hype! Going into warmer weather this will help my eye makeup stay on longer. This primer doesn’t irritate my eyes and it’s just as easy to remove as it is to apply.

2. Kmart Iridescent Metal Straws – Metal straws are good because they are reusable but what’s cool about these ones is they are iridescent and change colour depending on the light. Sometimes mum and I make milkshakes if we have milk that’s going to go out of date and we don’t want to waste it. We’ve started using these straws in our milkshakes instead of plastic ones. The texture of the metal is different if you’re used to plastic but it’s no big deal. (FYI, I’ve reused plastic straws in the past too, I don’t always throw them away after one use).

3. Kylie Little Stars Duvet Cover – This duvet cover is actually for children but it doesn’t look like it. The duvet is a double and I don’t know about you but I never had a double bed as a child – I still don’t – it has the perfect amount of drop for my king single bed. The duvet is a lovely blush pink colour although it looks more cream in photos (the duvet was the backdrop for the main image). With this duvet set I got two pillowcases and three cushions and a couple of weeks ago I posted a picture of the cushions to my Instagram. The sparkly sequins are what make this set look more grown up.

4. The Body Shop Virgin Mojito Body Butter – I have only used this a couple of times already but I do like the scent. The scent is zesty and fresh and not like the girly, sweet ones I usually plump for. I bought this in a Boxing Day sale in December 2017 so I’m glad to finally start using it! I do think it is an appropriate spring scent and using this in winter would have been odd. I love the lime green colour of the body butter and the texture is super soft and creamy.

What were your favourite things in October?