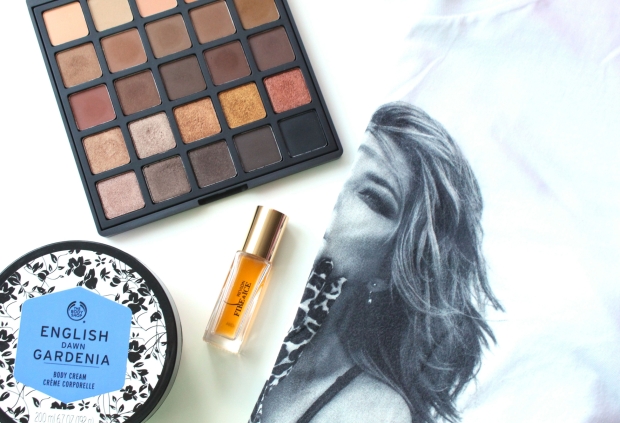 February’s favourites are representative of the things I enjoy most in life, beauty/makeup and music. I have been putting Morphe’s 25A Copper Spice palette through it’s paces and the heat/skin rash on my arms seems to have cleared up so I am now able to apply lotions and moisturisers again. February has been all about Shania, tickets for her NZ concerts went on sale and I have been singing along to her music a lot!

1. Revlon Fire & Ice Rollerball  – I got this rollerball in a Revlon set a couple of Christmases ago and only recently began to discover how much of a gem it is. In the same set there was a bottle of Fire & Ice perfume (long finished) but the rollerball scent is nicer and lasts all day. I spray body mist all over and apply the rollerball directly to my neck for an added layer of scent. This is travel friendly too which is great.

2. Morphe 25A Copper Spice Palette – This eyeshadow palette was a Christmas present from my brother and I had used it a few times but not properly tried more than a handful of shades. I was a little intimidated having 25 shades to choose from, I’m used to 12 or less. This palette is pretty much all I’ve been reaching for in February and it is great for everyday, work looks. The fourth row of shimmers are beautiful! My go to is to apply one of the lighter shades as a base, one of the many browns up into the crease and use my finger to apply one of the shimmers over top. The shades blend well and I can’t see myself getting sick of using this anytime soon.

3. Shania Twain T-shirt – I got this shirt as part of the Now album bundle I ordered last year and the quality of this t-shirt is lovely. The material is super soft and the sleeve length and the way this sits on me is perfect. I was missing a nice white t-shirt and this filled the gap. I also wore this when I bought Shania concert tickets earlier in the month!

4. The Body Shop English Dawn Gardenia Body Cream – The heat in summer makes my skin hot and itchy and for a while I couldn’t use anything on my arms after a shower because it would irritate the already dry skin. I am glad there has been some cooler weather lately and I can get back into my after shower routine. I purchased this body cream around Boxing Day and it is creamier than The Body Shop’s normal body butters – it feels velvety soft. The scent is floral and gorgeous and lingers for a long time (in a good way).

5. Mini golf – To celebrate Valentine’s Day my boyfriend and I played a game of mini golf. I had never played before but had always wanted to. I found a place that is open in the evening and we went after 8pm so the golf course was lit up with fairy lights and it looked so pretty. There were also bunnies hopping around throughout the game and they were adorable! Despite never having played before it was a close game, at the halfway point we were tied but in the end my boyfriend won by five points.

What were your favourite things in February? 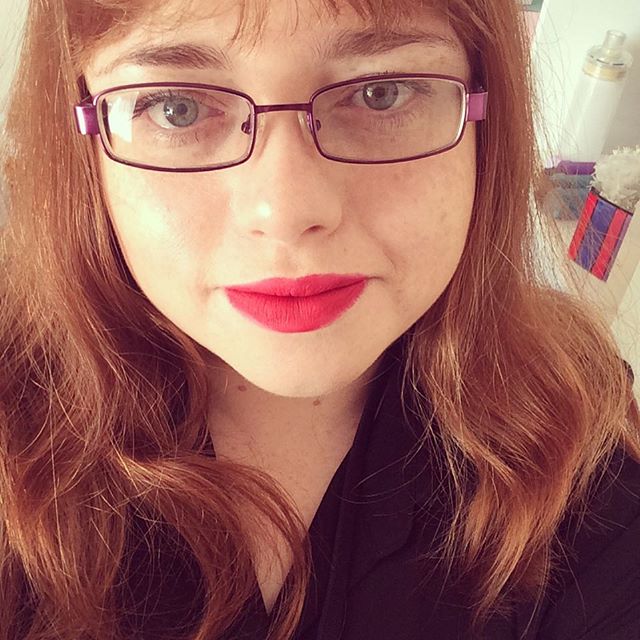 Instagram vs Reality… swipe to see the cutest photobomb 🤍
The Charlotte Tilbury Pillow Talk lipstick and eyeshadow palette was the inspiration behind this recent @spacenk haul. I’ve wanted to try the iconic lipstick shade for a long time and the rose gold tones of the Pillow Talk quad are gorgeous. The neutral tones of the Exagger-eyes quad drew me in too.
Posted this to Stories the other day but I like it enough to feature on the grid too 💜 #selfie #redhead #fotd #motd #goodmakeupday #beauty #makeup #lipcombo #hudabeauty #mac #velvetteddy #colourpop
Who else can relate to having a drawer full of makeup with a well organised lipstick section?! I have more than I probably need but it’s the makeup item I love most and find hard to resist 🥰💄 #makeup #beauty #lipstick #lipsticklover #lipstickaddict #makeupstash #makeupreel #beautydrawer #beautyenthusiast #makeupenthusiast
Best MLBB (my lips but better) shades for redheads and those with fair skin 👩🏻‍🦰
Blaming the weather for the lack of feed content recently. Haven’t really been out and about doing anything either so here’s a photo dump of some pictures on my phone 👍🏻